To be honest, when I hiked the Long Trail in 2013, the direction my hiking buddy and I would take wasn’t truly decided until shortly before beginning.  This wasn’t for lack of planning, but rather, jury duty popping up for my wife who was getting us to the trail, and that timing affected her availability.

A few questions to ask yourself when making the decision:

Do I want to ease into the harder hiking? 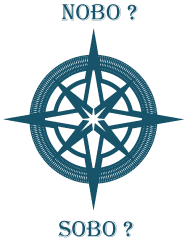 Going NOBO will allow a hiker to break their body in a little easier than heading southbound.  This isn’t to say that the southern end of the trail is a cakewalk, but the climbs are more gradual in the southern portion of the trail.  The northern section is more difficult hiking. It has more rocky climbing/descending, which in wet weather can be challenging.  Many northbound hikers still decrease their daily mileage in the northern end of the hike, even though they have had a good warm up and started to get their legs in the south.

What part of the hiking season will I be heading out?

If you are beginning early (late May, early June) in the hiking season, you may find some benefit going to NOBO.  Even though the state is not as large as Texas, there is a temperature difference between southern and northern Vermont.  Beginning in the south will  give the north more time to warm up and possibly dry out a little from winter.  For my hike on the LT beginning in early June and walking SOBO, it was chilly at some of the higher points in the north. We received some heavy rains, and were soaked, and quite cold.

If you are beginning late in the hiking season (End of September and later), beginning in the north and walking SOBO will give you the chance to walk towards relatively warmer temperatures as the season changes.  If you are timing your hike during the fall colors, you will most likely experience the colors for more of your hike walking southbound as the leaves will change colors later in the south.

Walk with or against the flow?

A higher percentage of Long Trail hikers go northbound.  The southern 100 miles of the LT has a lot of northbound hikers on the Appalachian Trail (AT) beginning in the 2nd half of June through the 1st week in September.   There are certain periods where you could easily run into 30+ northbound AT thru-hikers per day.

If you are walking southbound, you will be passing the majority of the hikers face on.  This has the advantage of not having as many faster hikers sneak up on you – having to regularly give way or be startled (if you get startled when people walk up from behind).  If you are a fast hiker and like to keep your pace, going southbound is easier in this sense, as it is faster to pass people when meeting them head on, rather than from behind.

Walking northbound with the flow, you have the chance to walk with new people, if only for a few minutes when you keep the same pace.  More time can be spend with AT hikers while walking, which may be of interest if you are looking to do the AT in the future.